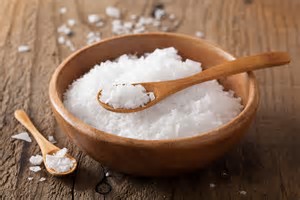 Everywhere we go out to eat we can find a salt shaker on the table. We all know that one person who adds extreme amounts of salt to their food before tasting the dish. We have been taking salt for granted due to it being available everywhere. How long has salt been a vital item in our pantries? And where exactly does salt come from?  I will answer some of these questions asked by most food consumers.
Salt is made up of sodium and chloride ions which make salt an ionic compound. This means that salt has a high boiling and melting point. Salt was not just a great discovery for flavor in foods, but for the preservation of foods. Salt helped eliminate the dependence of seasonal offerings and helped preserve foods for the seasons when those foods were scarce. Also, by making preservation of foods possible, the people could now ship food across the land. Salt is believed to have been found by accident when fisherman brined fish in sea water and left them in the shore to dry or ferment. Salt is found in sediment deposits by the sea. Sea salt is found by the evaporation of sea water.

In the old days salt was very precious and held a high value. The word salary comes from the Latin word for salt, which used to be considered a form of currency. The Roman empire created salt roads, which were a steady source of income for the empire. Today, there are many different types of salts used around the world.
Salt can be found in most foods from breads to meats for flavor. An important use for salt besides for the flavor is for curing meats. Salt is used for preservation by drawing out the impurities. Aside from salt making foods last longer, it is used for impeding bacteria growth in foods. Salt is used for brining meats. Brining is when you dissolve salt in water and submerge meats in the salt liquid for juiciness and flavor. This is commonly practiced on Thanksgiving Day in America when the turkey is brined ahead of time to avoid a dry turkey dinner. Examples of salt in foods include salume, sausages, and more commonly consumed bacon. Salt in food is a big part in the Garde manger and charcuterie fields.
Most homes have a box of Morton’s iodized salt, meanwhile most kitchens carry Kosher salt in their dry storage. In the 1920’s Americans were falling ill to iodine deficiency. More than two million people were fighting the illness. In response to this the university of Michigan developed an iodized salt for cooking. This would give the American people the iodine they needed to beat thyroid disease. To this day most households in America carry Morton’s iodized salt in their kitchen pantry. As for Kosher salt, it is a non-iodized salt that is flakier than regular table salt. It got its name from the Jewish religion using this salt for extracting blood from foods. Other salts include grey sea salt, and pink sea salt. Himalayan pink sea salt is mined out of the Khewra Salt mine, the second largest salt mine in the world. It is pink from iron oxide. This salt is used for nice presentations on plates, and some believe it tastes better than regular salt.
In the old days salt was valuable like money due to its curing properties. After the introduction of refrigeration, salt lost some of that value, yet the cured foods remained. To most chefs’ salt is important for cooking applications. Sadly, salt has become a crutch for mediocre chefs’ that use salt as their main flavoring instead of a flavor assistant. As a chef it is important to showcase the main flavors from food using the least amount of salt possible. Too much salt is bad for people with diabetes and heart conditions. There is a problem today with salt usage in processed foods. Our goal as chefs’ is to educate ourselves and fix these problems in the food world for a healthier future.